“S” is for Support

What makes your team tick?

Great teams have clear communication. But people communicate differently. Some people want information presented in a linear fashion with all details provided. Others want to get right to the bottom line. Still others want to connect on a personal level first, before diving into business. Others thrive on security, fear, or change and need time to process new information.

Team Oztera wanted to improve their communication both inside and outside of the company.

The first step for this team and any group of people is individual self-awareness. And when it comes to an understanding of different communication styles, DISC is a great place to start.

Unlike many other tools and assessments, DISC focuses on observable behaviors. Knowledge of DISC and an awareness of differences can help a speaker modify his natural style to better fit the style of his or her audience. In my training classes, we use a game to simulate an assessment and have found the observation of different playing styles to be a telling clue to a person’s behavior.

DISC has four main behavioral styles, with most people falling into one area or another with varying degrees of intensity. The letters of DISC represent:

There are two main dimensions of each behavior: Data versus People and Introvert versus Extrovert.

Strong D and C profiles tend to be focused on data, while the I’s and S’s tend to be more people oriented.

D’s and I’s tend to be extroverts while C’s and S’s tend to be introverts. The difference between these two attributes has to do with energy—extroverts draw energy from crowds, while introverts are rejuvenated by solitude.

All behaviors can be demonstrated by a person if the situation warrants, but the recovery time needed after the response will depend on the person’s natural style. For example, a high C can make a presentation to a crowded room, but may require quiet time to recover as soon as the presentation is over. 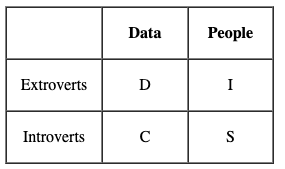 If you were to define an ideal set of behaviors for a person handling daily software support calls, it would probably include a healthy dose of “S” for steadiness, combined with a heaping portion of “C” for conscientiousness. The S behavior would indicate that the person answering the phone was interested in people and is a team player, while the C would indicate an organized approach and good attention to detail. Neither of these styles long to be in the spotlight or respond well to high emotions. Both of these contemplative behaviors would be welcomed by a distraught caller with a problem that needed to be solved.

The team at Oztera recently had a half-day team communication training class in which they gained insights into their natural communication styles. They learned about the dangers of communicating based on assumptions about information that is presented, how hard it is to form an opinion based on partial information, how different people like to receive information, and how certain communication techniques might be bothersome to others. It is telling that they recognized the importance of improving their individual and team skills, but also wanted to learn techniques for better serving their customers. They understood that their technical expertise is important but it will have no value unless it can be clearly communicated to their customer.

During the training, it became clear that there were a number of (S)upporters on the team who function as the glue that keeps the group working together. They worked well with all of the other team members and enabled the analytical, data-driven C’s to focus on the technical details that have to be mastered in application development. The makeup of this team of developers, support professionals, and implementers made for a diverse group with different but complementary strengths. And with their new insights, every team member will be seeking out ways to modify their natural style to better relate to both peers and clients.

One team member found the opening team exercise to be particularly insightful. No single member of the team had the full picture which made the project frustrating at times. Once they pulled together and shared their piece of the puzzle, they were able to successfully complete the assignment, even under pressure.  She also learned that it was important to communicate timelines and to speak up when the work load is getting too heavy. While a day’s training is not going to change everything, she said “better communication is an ongoing work in progress.”

Another team member said the training “helps me take a step back and not take it personally. Rather than focusing on the emotion of an interaction, I try to figure out how best to respond to the person talking and provide them with the information they need.”  The training also made it clear that personal interactions are still important and relationships matter.

They summed up the day this way: “Be open to people who aren’t exactly like yourself, try to imagine where they are coming from, and try to respond to them in a way they would understand.”

At the end of the day at Team Oztera, everyone agreed that “S” in DISC doesn’t just stand for Steadiness, it also stands for Support.